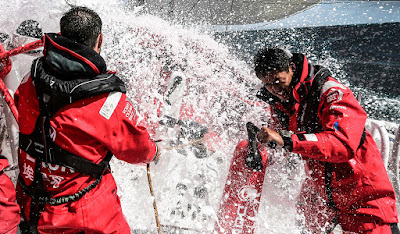 Safety at Sea instructor Paul Cunningham helps us to understand the differences between inflatable PFDs, and the pros and cons of manual and auto inflate models.

As the old adage goes, the best PFD (personal flotation device) is the one you’re wearing. But when it comes to inflatable PFDs, the debate is far from settled as to whether manual or automatic is the way to go.

“When choosing a life jacket, one should always consider how and where it is to be used,” says Paul Cunningham of SouthCoasting Navigators. Among his many nautical credentials, Paul is a frequent US Sailing Safety at Sea seminar leader and a Royal Yachting Association Yachtmaster examiner.

“I would never recommend a type of PFD or activation; what I do always recommend is that everyone should do their own risk assessment—carefully,” he says.

Paul says a thorough risk assessment should include (but is not limited to) how good a swimmer you are, how likely you are to be on deck alone, whether the type of vessel you sail is prone to capsizing or keel problems, the water temperature you sail in (water colder than 60˚F can instigate cold water shock, rendering a casualty incapable), and how likely you are to suffer a fall or get knocked down, either due to age or lack of balance.

“Personally, I am quite strong with good balance, a strong swimmer who often sails high-performance vessels that could possibly capsize or suffer keel problems. I chose a manual inflation life jacket. My mother-in-law is a poor swimmer, often suffers falls, isn’t very strong, and is prone to panic. I say she doesn’t need a PFD, but my wife insists that she wears an auto inflate model. My wife is fit and a good swimmer, she sails J80s midweek and cruisers on weekends. She has chosen a lifejacket that is easily converted from auto to manual and back, complete with a tag to show which one it is conforming to at the time,” he says.

Here, we take a look at how inflatable vests work and the pros and cons of both manual and automatic PFDs.


Every inflatable PFD has an inflator mechanism that triggers a carbon dioxide cylinder to fill the bladder with air. Manual PFDs inflate when you pull the “jerk tab,” a yellow handle that dangles at approximately waist height, which pierces the CO2 cylinder. An automatic PFD will inflate when the water-soluble bobbin comes in contact with water releasing a spring-loaded pin that punctures the CO2.

The newest form of automatic inflate PFDs are triggered with a hydrostatic pressure valve, which is only triggered when immersed in a certain depth of water (the actual depth needed to trigger the valve varies by manufacture).

There are four ISO levels for PFDs: 50, 100, 150, and 275 newtons of buoyancy. Recently, the USA agreed to recognize the ISO system, which makes life easier for people who sail or race in different areas around the world since the our chosen PFD will meet requirements everywhere.

Paul says the ideal amount of buoyancy for offshore sailors is 150 newtons, although there are PFDs designed for sailing with 175 or 190 newtons. (PFDs with 50 or 100 newtons are for use in sheltered waters where rescue is close at hand while 275 newton models were designed for use by the oil and gas industry for workers wearing or carrying heavy clothing and tools.)

Inflatable PFDs are also designed to right a wearer who is face down, putting them onto their back so that they can breathe.

The pros and cons of automatic inflate

Automatic inflation occurs when the PFD gets wet, so if the user is incapable of activating in a timely fashion the device will still inflate and support. Many people say this is advantageous if knocked unconscious, but the real advantage is due to incapability caused by cold water shock.

“If you are unconscious in the water and being supported by a life jacket in any kind of seaway, it is unlikely that you will not ingest water into your lungs and drown,” says Paul. “Using a PFD at sea requires the deployment of a spray hood or holding both hands cupped together over the mouth and nose to enable breathing without seawater entering the lungs. An unconscious person is supported by an auto inflate PFD but cannot perform these acts to ensure survival.”

On the other hand, more than one automatic PFD has inflated while the wearer was working on the bow, or even just sitting on the rail. If you’re on a very wet boat in big breeze or in pouring rain, you won’t want to have a traditional auto-inflate vest on. If you do want the benefits of auto inflate without the risk of it going off under a wave, a hydrostatic PFD is a good option because it won’t inflate just by water contact, but requires you to actually be in the water to activate.

Hopefully, cost isn’t an issue when determining the best equipment to help save your life, but it is worth noting that rearming a hydrostatic life jacket—whether it’s been used or is simply past its expiration date—is significantly more expensive than rearming a traditional auto-inflate or manual PFD.

The pros and cons of manual inflate

“When using a manual inflate live vest, the wearer has complete control over the inflation of the PFD and chooses when to inflate it, reducing the possibility of unwanted inflation or entrapment,” says Paul. There is absolutely no chance of a manual inflate vest going off when you don’t want it to, so if you sail a small boat like a J/70 or in an area with regular rain showers, manual maybe be the way to go. Also, manual inflate PFDs generally require less servicing than auto-inflates vests.

However, in order for the vest to inflate, the wearer must be conscious and physically capable of pulling the cord. Manual inflate vests are not recommended for people who don’t know how to swim or for children under 16.

Another drawback to the auto inflate PFD is the rare occasion where you’re in a serious boating accident and you find yourself trapped under the upturned hull and unable to get out because you’re life jacket has inflated. Your only options to get out are to take the vest off (not recommended) or to deflate the vest using the valve, swim out, and then manually blow it back up again (highly taxing).

The hydrostatic vest probably won’t prevent this scenario because you’d likely be submerged deep enough during the event that the vest would inflate. However, it’s important to know that while manual vests can’t be converted to automatic, automatic vests CAN be converted to manual inflate using an adapter kit. It’s not something that can be done on the fly, but it isn’t very difficult either, and the automatic to manual switch could be achieved if building conditions suggest it would be a good idea.

Other things to consider

Whichever type of activation you chose for your PFD, “it will be of little use if it is not fitted with a strong harness, a spray hood, and crucially a crutch strap or leg straps,” Paul says. A tether, water-activated light, reflective markings or tape, a whistle, and safety knife should also be attached to it, as well as a PLB or SART in some cases.

Always FREE GROUND SHIPPING for all US orders.
No minimums, no coupons, no fuss!

Ship to shore – We’ve got you covered